Nerds are another of those candies I grew up enjoying– but I’ve yet to get a solid answer on how the name originated.  What makes them so nerdy?

Well, however they got their name, Nerds have been around since the early 1980s.  Back then, I think they usually came two flavors to a package in small boxes that were divided down the middle.  There were two openings at the top of the box, so that you could eat, say, strawberry nerds for a while, then switch over to the grape, or mix them in whatever ratio you preferred.  (It was all very scientific, I assure you.)

While Nerds are still available in that format, lately I see them more often like this– Rainbow Nerds– five flavors of Nerds all bouncing around together in a large box.  It’s a bit chaotic.  I prefer my Nerds separated by color/flavor, because that way you get a stronger concentration of each individual taste (without the nuisance of having to pick through them by hand).  Still, I’ll take my Nerds as I can find them.

(Have you noticed that I’m using the name “Nerds” more than is strictly necessary?  It’s just so darn fun!)

Packaging:  Colorful, bright, and covered in goofy little armless critters that one assumes are what Nerds look like when they’ve magically come to life. . . The box has a handy tab opening– perfect for saving some for later.

That said, the little screed on the back of the box may be pushing things a little:

“Greetings to you from Willy Wonka himself! Tremendous things are in store for you!  Many tasty treats await you!  Inside this Scrumdiddlyumptious package you will find MYSTIC & MARVELOUS SURPRISES that will Entrance, Intrigue & Delight you BEYOND MEASURE.  So don’t just STAND THERE with your mouth open.  Go On.  Feed Your Imagination.”

. . .Yeah. . . Maybe I’d be impressed if I were seven or eight.  At this point in my life, though, I question any candy’s ability to entrance, intrigue, and delight me beyond measure. 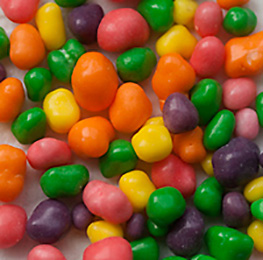 Appearance:  Again, bright and colorful.  Specifically, they are pink, purple, orange, yellow, and green.  The tiny bits of candy come in random shapes and sizes, with a nice touch of shine.

One negative about Nerds is their habit of falling into nooks and crannies (such as computer keyboards and between couch cushions).  That’s just a hazard you have to learn to live with.

Aroma:  There’s not a strong aroma, but there is a faint whiff of fruity sweetness.

Texture:  They’re crunchy, but not so hard that they hurt to bite.  They’re meant to be crunched.

Flavor:  The flavors include strawberry, grape, sour apple, lemonade, and orange.  Each flavor is distinct enough to be recognizable when eaten separately, but if you eat a variety of them at one time, the flavors are somewhat lost in a jumble of sweet and sour.  In fact, each individual flavor is a pleasant mixture of sweet and tangy, though some are tarter than others.

I’m not sure if my fondness for Nerds is based more on what they are or on nostalgia, but I’m sure I do like them.  They’re just plain fun to eat!

Yuck: Might be better if the flavors weren’t all jumbled together.