I don’t remember the first time I had Runts.  That’s not to say that they are not memorable– simply that they were a part of my earliest childhood training as a lover of candy. As such, I have a certain attachment to them.

When I munched Runts as a child, they came in five flavors:  orange, strawberry, banana, cherry, and lime.   Over time, the mysterious powers-that-be decided to play around with the flavor line-up.  At some point, watermelon and blue raspberry replaced lime.  Though I generally like watermelon-flavored candy, I personally find blue raspberry to be a disgusting crime against humanity– so to say that I did not approve of its inclusion would be putting it mildly.  Also, I soon realized that, though never my favorite flavor in the box, the powerfully sour lime was an integral part of the Runts experience.

Unfortunately, that was only the beginning. . .  The next little game the Man decided to play involved taking away not only the watermelon and blue raspberry, but also the cherry-flavored Runts.  (Cherry had been my favorite, as a child.)  In exchange, we got pineapple and mango.  Pineapple- and mango-flavored candy (particularly these versions) could not hope to compare to cherry– or even the less-beloved watermelon.  The hurt went deep.  (I’m still grieving, actually.)

That was a dark period in the history of Runt.  Most of us prefer not to talk about it. . .

Perhaps Wonka (or Nestle, the brand’s owner) took a hit in the pocketbook (or an earful from angry Runts fans), because they soon changed the flavors yet again.  (Any bets on when they’ll decide they need to spice things up a little and give us kiwi or grapefruit?)

In their current incarnation, Runts are available in strawberry, orange, banana, green apple, and grape flavors.  While I still feel the absence of cherry and lime, I must admit that the grape and green apple flavors (particularly the latter) are a vast improvement over pineapple and mango (never may they return).

The bright orange box stands out and is easily spotted by those of us scouring the candy aisle for an old favorite.

Cartoon versions of the fruit flavors seem to lead active, energetic lives.  Banana and Strawberry share a surfboard, and orange does a little in-line skating, while the new fruits on the block, grape and green apple, skateboard and kick around a soccer ball.  (I find myself slightly jealous of them.  I do none of those things.  Instead, I spend my spare time blogging about candy. . . Ah well, such is life!)

One possible complaint about the packaging is that there’s no way to see what the actual candy looks like before purchasing and opening the box.  There’s also no description of the candy.  Is it sweet or sour?  Is it soft or hard?  True, there is an invitation on the back of the box to try another product called “Chewy Runts”, which might be a clue that original Runts are not chewy.  In any case, this is not likely a big problem for a candy that’s so well established.

On the plus side, these resealable boxes are very handy for keeping the candy where it belongs. 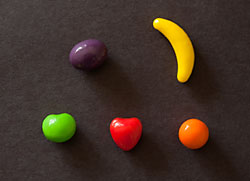 Presumably they were named  “Runts” because of their diminutive size.  The banana, at nearly 3 cm long, looks the biggest, while the largest dimensions of the others all measure less than 1.5 cm.

The candies are attractive, with their shiny, brightly colored coatings.  They are hard enough to last a while in the mouth, if you resist the urge to crunch them– yet they’re not so hard that you can’t crunch them, if you wish.  If you do bite into them, you’ll find that the texture is powdery, but not unpleasantly so.

Strawberry, orange, and banana are all sweet, while green apple and grape are slightly sour.  Each flavor is distinct– meaning that the banana doesn’t taste like the strawberry, and the orange doesn’t taste like the green apple.  I wouldn’t go so far as to say that a first-time taster could identify every flavor with no visual clues, but that’s not necessary to make this a very pleasant (some might add “addictive”) candy.

The flavors are more powerful when the candy is crunched than if it’s allowed to slowly dissolve.  Even so, this is a fairly mild candy.  Perhaps that helps explain its popularity.  There’s very little to offend, here, and quite a lot to please– especially if you grew up loving these sweet little Runts.