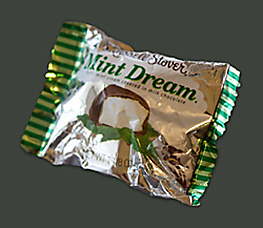 The “Mint Dream” from Russell Stover comes in a pretty, shiny foil wrapper bearing the description “fluffy mint cream covered in milk chocolate“.  Unfortunately, the package may be the best thing about this particular candy.

To be fair, there’s nothing to complain about in the candy’s appearance, either.  It’s an attractive, smooth chocolate round approximately two inches in diameter and a bit over one inch tall.  A pleasant aroma of chocolate is preceptible, but there’s not much (aside from the wrapper) to hint at mint, which is interesting, as most minty candies tend to announce their flavor with a strong scent of mint.

On to the tasting!

The chocolate coating (of a thickness sufficient to make it a noticeable flavor and not a mere protective covering for the filling) is nice enough– but the filling is odd.  At first glance, it’s attractive– a creamy white (as depicted on the wrapper) with a whipped, frothy texture.  A small nibble tastes almost more buttery than minty– not what you expect from something named “Mint Dream”.  A larger bite (with a higher filling-to-chocolate ratio), however, reveals a slightly more bracing mintiness.  It’s a “dark” mint flavor, though, if that makes any sense, not pleasantly sharp as you find in many mint candies (such as the York Peppermint Pattie). 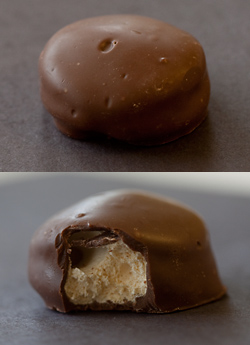 Here’s a curious observation of the Mint Dream:  The “fluffy” filling melts a little and turns a bit slick after contact with… er, mouth moisture, which creates a somewhat less appealing look in the candy, once you’ve begun to eat it.  (The word “slimy” comes to mind.)  On the plus side, this also means that it melts in your mouth.  (I understand that a good number of people find this a selling point in foods of all kinds.)

The Mint Dream is a bit of an odd size.  Rather like a Cadbury Creme Egg, it feels bigger and richer than your average fun-size candy bar, but it’s somewhat messy to save some for later.  (In all honesty, if I liked this candy better, I wouldn’t even have considered saving some for later.  The fact that the idea even came into my head is a sign of how little I liked it.)

Overall, this candy is nothing to write home about.  It isn’t exactly awful, but I didn’t really enjoy eating it– and that’s the whole point of candy.

Note:  I have read that some people prefer to eat this candy cold, and I imagine that would increase its appeal.  Still, for my money, the simple York Peppermint Pattie or Junior Mint wins the day.  It all comes down to texture.  If you like ultra-soft, fluffy fillings, chocolate, and mint, try the Mint Dream, by all means.

Yuck: Price per ounce is high. Flavor and texture not my favorite.